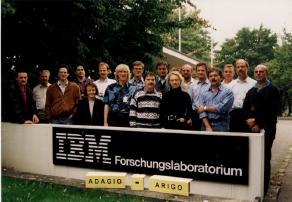 The ARIGO-system was developed in 1993 at the IBM research laboratory Rüschlikon in Switzerland by scientists like the Nobel Prize winner for physics, Dr. Georg Bednorz, and the former head of the department of nanotechnology, Prof. Dr. Bruno Reihl.

In 2013 EDC's mission became to help other companies to adopt the LonWorks technology as Echelon Solutions Partner within an outsourced profit center, ARIGO Software GmbH. Jörg Seiffert and many key developers and experts are part of this new organization.

Since 2016 ARIGO offers the FieldServer product line as an Authorized Reseller and became the Support Center for European integrators and OEMs.